2004: Google book search on “Clumber Spaniel” found this (2 Dec 2005)
The Hippie House by Katherine Holubitsky – Juvenile Fiction – 2004 – 233 pages
Page 38 – Halley first distinguished herself simply by being a Clumber spaniel. Dad had read about the rare breed in a duck-hunting magazine. …

2004: Google book search on “Clumber Spaniel” found this (2 Dec 2005)
Something Borrowed, Something Blue by Sandy Henry – Fiction – 2004 – 188 pages
Page 15 – And she couldn’t forget their big Clumber Spaniel, Malcolm. She hadn’t thought about that dog in a long time. He was short and squat, … (one mention only apparently)

2002: Google book search on “Clumber Spaniel” found this (2 Dec 2005), raye’s got a VERY special Clumber!
Canine Courage by Tiffin Shewmake – Pets – 2002 – 200 pages
Page 176 – … stationed on the Pacific island of Biak, was sitting in front of his tent when a lieutenant walked past with Raye’s black Clumber Spaniel on a leash. … (one mention only apparently)

1997: Google book search on “Clumber Spaniel” found this (2 Dec 2005)
The View from King Street: An Essay in Autobiography by Christopher Hurst – 1997 – 464 pages
Page 26 – … and sending his Clumber spaniel, Brutus, after them. His academic forte was coaching in Latin and Greek, and I had my first Latin lesson with him. … (only mention listed)

1990 The Road to Westminster : How to Select and Train a Purebred Dog and Prepare It for the Show Ring (ISBN:1558701699) Freeman, Robert B.; Freeman, Toni C.  Betterway Publications, Inc., White Hall, VA, USA, 1990. Soft Cover. 8vo – over 7¾” – 9¾” tall. 176 pages including index. Authors have more than twenty years experience owning, breeding, and showing purebred dogs. They specialize in Clumber Spaniels and nine of their dogs are or have been champions. They explain all the things that have made them successful, not only as breeders and handlers but as loving ‘bonded’ owners of happy, contented dogs. I understand (see this is one Clumber theme book not in my collection, yet – has since arrived) it contains many b&w photos of the Clumbers.

1956: The Clumber Pup by Eleanor Farjeon juvenile appears only to have been published in Farjeon anthologies

1930: All Spaniels Their Breeding, Rearing and Training  by Lloyd, Freeman  Editor Field and Stream, New York, Very small breed section but what a lovely pair of Clumbers in the wee tiny b&w photo, I reckon I could live with the stacked one, and the one seated is magnificent. Also the frontispiece is a rather badly coloured & re-formatted litho from the Abraham Cooper Scrub A Shooting Pony (Hoare Collection)

1920: The Story of Jack- A Tale of the North and Other Fascinating Dog Stories by Lytle, J. Horace  The Pettibone-McLean Company, Dayton, Ohio, 1920. Burgundy Cloth/gilt Hardbound. Illustrated with Engravings (illustrator). First American Edition. 12mo – over 6¾” – 7¾” tall. 164pp.engravings for each story. Ho ho, what a secret this one has managed to become – there’s the story of Bruce the Clumber & golfing! See the story here

1918: The Little Red Balloon by Caroline Hofman with pictures by Rachael Robinson Elmar … there is definitely a Clumber in the family although referred to as a white curly dog. Juvenile fiction

1895 The Carbonels Yonge, Charlotte M, and W. S Stacey New York: T. Whittaker, 1895. Don the Clumber gets one mention when out walking with family and watnign to get some of cake 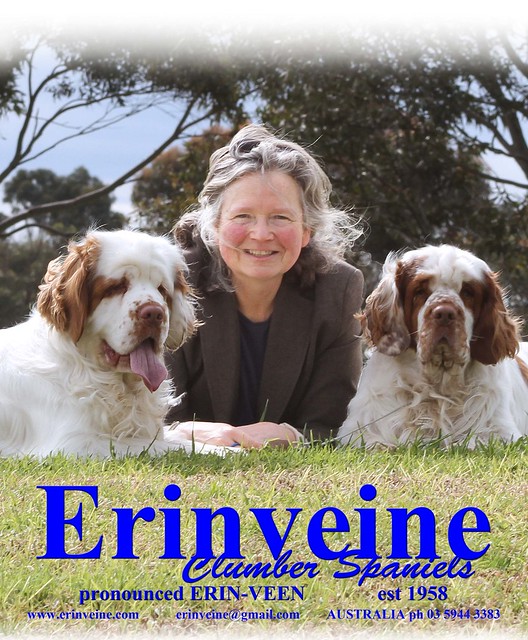